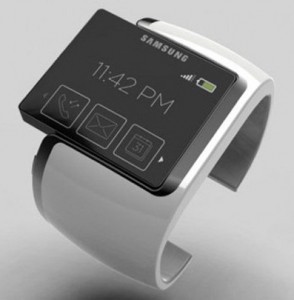 It’s already known that Samsung are building a smart watch thanks to the company’s Executive Vice President Lee Young Hee confirming such in May. It seems that they’ve gone off the name Altius in favour of GEAR.

Back in February I brought you news that Samsung were working on competition to Apple’s iWatch and that it could be called the Samsung Galaxy Altius.

Now a trademark filing for a device called the Samsung GEAR has been unearthed by the team over at Phandroid – which they reckon could refer to a new Samsung smartwatch.

The trademark filing by Samsung includes certain words such as “wrist watch” and “bracelet,” which does strongly indicate that GEAR could very well be a smartwatch.

Other large manufacturers such as Sony, Apple, Google, and even Qualcomm are also believed to be developing their own smartwatch devices which could lead to a boom in the wrist worn gadgets.

I’ll be sure to bring you more information as I get it.