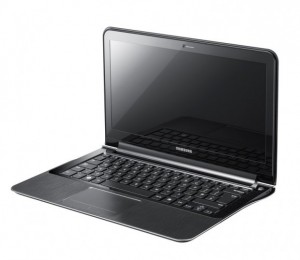 It’s time that the super model skinny Macbook Air started to check what it’s eating as Samsung has brought their new 9 series to the party.

The 9 series is a 13.3-inch notebook made from a sci-fi sounding material called Duralumin which makes it “featherweight”.

Measuring 16.3mm thick and weighing just 1.31kg the ZX310 (as it’ll be known outside the US – sounds like a Sinclair machine to me) squares up to the new MacBook Air‘s vital stats of 17mm at its thickest, and tipping the balance at 1.3kg.

The SuperBright Plus 1366Ã—768 res screen is LED backlit, with 400 nit brightness and is all running with a Sandy Bridge Intel Core i5 or i7 processor in the engineroom being partnered by up to 8GB of RAM.

You get a 12 second boot time thanks to Samsung’s Fast Start instant-on and a battery that will last up to “three times longer than a typical notebook battery” – I’ve heard that figure is 6 hours.

All that niceness costs in the region of $1,599 and should be purchasable from February.