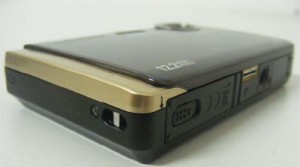 This is what I’ve been waiting for!

Samsung has decided to throw its hat in the ring and stand front and centre boldly thrusting Geotagging into the air with its forthcoming Samsung ST1000.

Some sneaky shots depict that the ST1000 has a 12.2MP sensor within its compact body together with a 5x optical zoom Schneider-Kreuznach lens.

Then you whack on a â€œGPSâ€ module then things start to rock.

According to Samsung Hub, the Samsung ST1000 also has a 3.5-inch touchscreen that supports finger gestures, plus image stabilisation and an ISO range of 80 to 4800.

Add Wi-Fi and Bluetooth as well as face and blink detection to the â€œTouch focusâ€.

The Touch Focus thingy could point to this being the upcoming Samsung â€œTap and Takeâ€ that slipped onto the interweblogosphere last week or so.

All shall be revealed on 13th August, when Samsungâ€™s teaser site promises to reveal allâ€¦