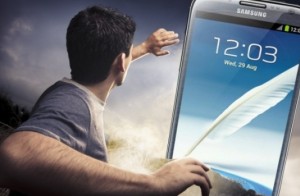 Things are definitely hotting up at Samsung. Could Sammy be set to to reveal the Samsung Gear smart watch at the same time as the Galaxy Note 3?

Samsung could well be plotting to announce their Samsung Gear smart watch along with the next generation Galaxy Note tablet in a few months time. If they did pull this off it would not only put them ahead of Apple’s iWatch but also the news of the new iPhone too.

Samsung has previous with unveiling each generation of Note phablet in September at the annual technology trade show, IFA, in Berlin.

So, it stands to reason that expectations are such that Sammy will follow this established pattern and perform a show-and-tell of their Note 3 this year.

Patently Apple reports that the Samsung smart watch will arrive at the same time packing a modified version of Android as the watch talks to the Galaxy phone or phablet you have about your person. It will squirt out notifications so you don’t have to fetch your phone from your pocket or your Note out of your bag each time.

Apple’s  iWatch, which could feature a degree of Liquidmetal, isn’t set to arrive until late 2014 so Samsung could be months ahead, but Sony is already on to their second generation of Smartwatch which was announced last month.