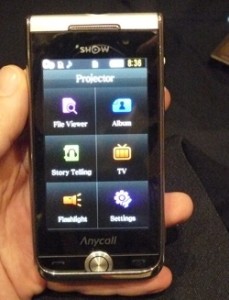 Looking for a pocketable projector that also doubles up as a touchscreen phone?

The bad news is that it’s a Korea-only phone (it gets shipped next month) and according to Gearlog’s Sascha Segan no one seems to know much about it.

What is known is pretty positive though.

TheÂ blower runs on Samsung’s TouchWiz UI, can project any of the visual media stored on the phone and DMB-T mobile TV signals, or will work as a torch.

There’s more pics on Gearlog, or take a peek at CrunchGear’s video below.