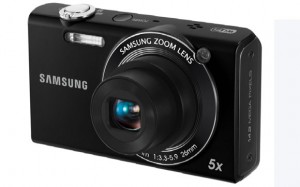 It has enough Wi-Fi cleverness to be able to ping your pics to the web or have them backed up on a puter hooked up to your home network. Â It’ll even sling them sans wires to your networked HDTV!

Yeah – we’ve all seen cameras that can send snaps to Facebook, Picassa and Photo Bucket but the SH100 has another bit of cleverness up its shutter.

If you happen to have the Sammy Galaxy S smartphone then you can pair the pair and, as if by some Android magic, you can control the camera remotely by using your mobile.

The Samsung SH100 can be zoomed and snapped from a distance and all can be seen as your Android phone becomes a live viewfinder.

This means you can lift the SH100 above crowds and, thanks to the clear view from the screen on the Galaxy S, take the shot without having to be 7 foot tall! You can join in on group photo’s and be less at risk when attempting to photograph Polar Bears 😉

As an added bonus – all your artwork taken using the Galaxy gets geotagged thanks to its GPS chip. Shame that the SH100 is lacking that bit but hey.

I’m digging the auto-backup feature which uses your home Wi-Fi network to detect when your PC is in range – when the camera sniffs it out it goes and automatically copies your new photos to it. If you’re the power-concious type that doesn’t like keeping your puter on at all times then the Samsung SH100 uses wake-on LAN features to wake your puter up before uploading photos.

Keep an eye-out for the Samsung SH100 coming out in March with an asking price of around Â£200.