Samsung Series 9 Skinny Laptop Slinks in to UK on Saturday 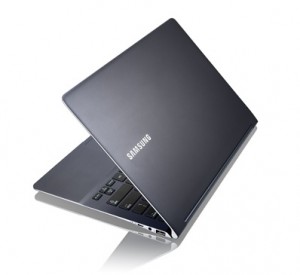 Samsung’s skinny Series 9 laptop is all set to debut in the UK on Saturday.

Confirmation has landed that the super-slender laptop would be on sale in this fair isle on February 25th, with other retailers including Amazon and DSG retail (which more than likely means PC World, Currys and Dixons) selling the Series 9 later this year.

The Series 9 is one of the few laptops that can point at the Apple MacBook Air and call it chubby.

The refined 2012 model of the unibody laptop Samsung calls the ‘world’s thinnest and most compact premium notebook’. Is it thinner than an Asus Aspire S5 then?

The main drawback with such a svelte figure is that there’s no room to squeeze in an optical drive or ethernet port.

Notice that Samsung is avoiding calling the Series 9 an ultrabook instead opting for “compact premium notebook”? – let’s face it, it’s an ultrabook isn’t it?

“For those seeking the ultimate notebook, it doesn’t get any better than this. We have tailor made the components so that they fit into the notebook’s single shell body ensuring it’s as slim and light as possible,” says Samsung. “We’ve taken performance to a whole new level to deliver impressive memory capacity, faster web browsing and a 10 hour battery life.”

There’s an Intel Core-i5 processor under the hood along with a 128GB SSD drive and the 2012 model features a new finish to the case – hopefully this will attract less finger prints than the previous version.

Would you prefer a Series 9 or a HP Spectre – basically: aluminium or glass?