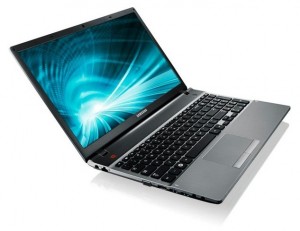 Samsung has just unveiled the latest member of its Series 5 range of laptops – the 550P.

There’s no doubt that multimedia is at the heart of the the Series 5 550P and the spec-sheet certainly backs up that promise.

Opt for the 17-inch model and you get a built-in Blu-ray drive and JBL optimised subwoofer speakers.

If you enjoy a bit of zombie killing or such-like then you’ll probably be glad to read that the 550P is packing an Nvidia GeForce GT 650M 2GB graphics card, with Samsung claiming that the processor will make 3D gaming twice as fast as the second generation CPU.

Both the 15-inch and 17-inch displays are LCD, with the former model weighing 2.5kg and the latter a heavier 3.05kg. Each variant runs on the Windows 7 Home Premium operating system.

Samsung says that both versions of the Samsung Series 5 550P notebook will be available in the UK this month from an array of retailers including PC World and Currys. The latter is listing the 17-inch version with 1TB hard drive for £900, and is available now.