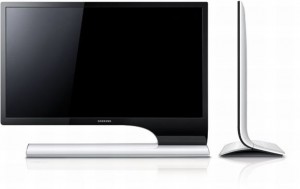 Samsung has announced that its new Series 7 TB750 HDTV and SB750 LED monitors are now available right here in the UK.

Those lovely screens wowed me as the 950, but the Series 7s can be snapped up in Blighty now and both of them include Mobile High-definition Link connectivity.

By using MHL technology, owners of compatible smartphones can share the device’s screen with the monitor for anything from games and apps to photos and videos in full 1080p – that’s as well as being able to sling stuff through using the standard HDMI port.

You can grab the TB750 from Dixons and Richer Sounds, whereas the SB750 is available from Amazon, John Lewis, Dixons, Comet and Overclockers.