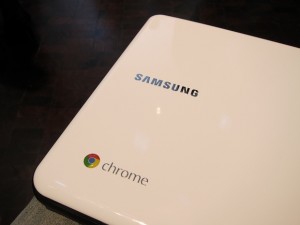 Samsung has been announced as the producers of the very first Google ‘Chromebook’.

The Samsung Series 5 Chromebook runs the cloud-based Chrome OS which means all of your software will be stored on the interwebs.

The 12.1-inch Samsung Series 5 is equipped with a 1.66GHz Intel Atom N570 dual-core processor and 2GB of DDR3 RAM with 16GB of storage. Don’t forget that you’ll not need much internal storage as pretty much everything will be done via the cloud 😉

The battery will last 8.5 hours and the Series 5 sports two USB slots, an SD card slot and a SIM card holder so you can get a 3G connection when there’s no Wi-Fi.

As there’s no complicated programs to open the Chromebook goes from off to ready in less than 10 seconds – Hibernation to on is practically instant.

As well as the swift reaction times of the Chromebook Google is also pushing the increased security that Chrome OS brings. You see, cloud computing gets rid of the chance of viruses and spyware setting-up home on your hard drive.

What Google fails to point out is that to use web-based computing you need to be able to get on to the interwebs. Granted, shoving in a 3G SIM card into your Chromebook will open up a better chance of getting hook-up but there are still parts of this green and pleasant land that barely gets a phone signal of any kind let alone 3G!

The fabby video below shows Chrome OS being used on a boat! It’s hard enough trying send a text in Whitby, on dry land!

Acer is also making Chromebooks and you can expect the first Chrome computers to arrive in the UK, US, France, Germany, Italy, Spain and the Netherlands in June. Google will offer discounted Chromebook packages to schools and businesses.

The Samsung Series 5 will be available in the UK on 24 June from Amazon and PC World. The 3G and Wi-Fi model will cost around Â£400, and the Wi-Fi-only model Â£350.

Just don’t expect Chrome OS to be available on tablets!