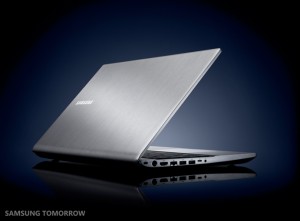 The 15-inch Chronos laptop is powered by an Intel i7 quad-core processor and manages to squeeze in a 15.6-inch display thanks to its super slim bezel.

From a birds-eye view you might see something familiar in the aluminium body, large touchpad and black chiclet keyboard but this is most definitely a Samsung Series 7 Chronos.

You get lots of Sammy smarts such as Samsung’s FastStart – this gets the laptop from snooze to awake in just two seconds while QuickBoot boots the machine from being off to open Windows 7 in just 19 seconds.

Battery Life Plus tech helps keep 80% of the original battery’s capacity for up to 1,500 charging cycles – that’s almost five times longer than the other competitors out there.

Most of you will already know that Samsung is pretty handy when it comes to screen building so it will come as no surprise to discover that the 15.6-inch display is one of Sammy’s and utilises Samsung’s Superior LCD technology. The screen runs at HD+ (1600×900 pixel) resolution, offers 300nit brightness, 16 million colours and comes complete with an anti-reflective screen film.

You actually get two flavours of Series 7 Chronos. There’s the 15-inch model and a smaller 14-inch model which weighs just 2.17kg with its larger sibling tipping the scales at a portable 2.31kg.