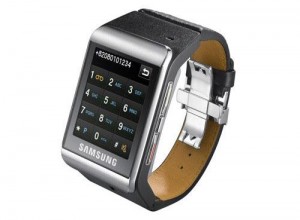 We all know about the LG watch phone which has already been confirmed for a UK launch with Orange in August – you can get it on a contract or without for around a grand!

If you don’t fancy forking out that much you may be in luck.

LG, you’d better keep an eye on Samsung as they could be due to unleash their S9110 touchscreen watch phone for half the GD910’s asking price!

I think Samsung could be on to a winner as it’s also better looking than Hyundai’s MB-910 and has a big name manufacturer unlike the sWap.

By all accounts the Sammy S9110 will be heading over to France this month for a more reasonable 450 Euros contract-free.

The Samsung has not only cut the price but it has also cut the width too – at just 11.98mm thick it’s described as the world’s thinnest touchscreen watch phone. This means you get to rock that retro-futuristic look without the wrist-chunkiness of an 80’s digital watch!

Ok, so the watch functions aren’t exactly publicised, but beneath that scratch-proof glass and stainless steel exterior there are some givens: The touchscreen, along with Bluetooth 2.1, an MP3 player, speakerphone, voice recognition functionality and best of all, the ability to sync with your Outlook email.

Although the initial Korean report mentions the French launch, it doesn’t mention which French retailers or networks.

Let’s face it though. If it lands in France it’s not hard to imagine that Sammy may bounce their S9110 over the Channel to us Brits.

More news as and when 🙂