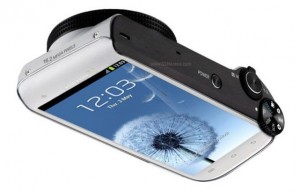 Expect more new release snippets with IFA Berlin just around the corner. The latest of which surrounds a new Samsung Galaxy S device – but this one is a camera!

The new addition from Samsung is expected to be an Android-powered Galaxy S Camera, which is rumoured to be equipped with a 16-megapixel sensor.

Other features of the Android Galaxy S Camera are said to include that 16-megapixel sensor, matched with a 4.8-inch screen borrowed from another popular member of the Galaxy line of devices: the Galaxy S III.

It could also be equipped with a SIM for uploading images to popular social networks and photo sharing websites. I would expect it to have at least Wi-Fi skills.

This camera will supposedly be announced at IFA, alongside the Galaxy Note II.

Whether the Galaxy camera will just be shown to see how it’s received or is an actual release product there’s no way of knowing at this time.

Would you rather have a smartcamera or a smartphone with crazy camera capabilities like the Nokia 808 PureView – a Windows Phone version is apparently imminent?