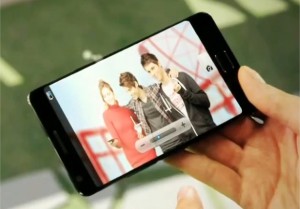 Will Samsung beat Apple in the edge-to-edge screen smartphone race and release their Galaxy B before the iPhone 5 lands? It does sound very likely at the moment.

Samsung is lining up their new clever blower which sports an a edge-to-edge display and, for now, it is being called the Samsung Galaxy B.

A translated report from the Maeil Business newspaper (nope, me neither) gives a nod and a wink that Sammy has been working very hard on a mobile phone with an almost bezel-free front.

Trudging through the Google Translated version of the article it seems that Samsung has had the Galaxy B in the oven for quite a while before this report broke.

The Galaxy B will feature a face that, except for a little bit at the top, will be entirely made up of screen. How cool is that?!

The screen looks to be a Sammy favourite – AMOLED – and word is that we could expect an official word or three about it during the summer months.

Obviously, this report may need to be swallowed with a salt sarnie and a pint of saline but, other than Sammy beating Apple to the edge-to-edge finish line, there are other reasons why this could be awesome.

Let’s forget the fact that the iPhone 5 was heavily rumoured to be equipped with an almost bezel-less face for a moment, as we were handed the iPhone 4S instead.

Imagine instead that the Galaxy B could turn out to be the much-anticipated Samsung Galaxy S3. The Galaxy S3 not only rhymes with B but it is also already pencilled in for release in this half of the year.

Add to that little factlet that there was a phone making its screen debut in a Samsung promotional video last month – that just so happened to be rocking an extremely thin bezel indeed.

If the iPhone 5 refuses to come out and meet everyone until the autumn and the Galaxy B is the Galaxy S3, then it looks like Samsung may be first across the line.