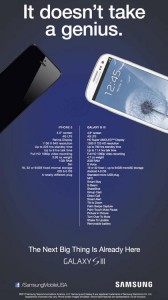 Apple only announced their new iPhone a few days ago but already Samsung is sharpened its claws and got all ‘handbags’ over Apple’s new baby.

There has been no secrecy over the rivalry between Samsung and Apple but now that the iPhone 5 has landed Samsung has taken it to a whole new level.

Samsung has placed a number of adverts in various newspapers, which compare the specifications of their Galaxy S III smartphone to Apple’s new iPhone 5, with the tag line “it doesn’t take a genius” – no doubt also a dig at Apple’s Genius Bars.

The thing is, if the Galaxy S IV rumour is true then Samsung can’t be this confident back at base.

What do you think? Personally I think this public cattiness is as embarrassing as watching elderly uncles fighting over the last free drink at a family wedding – or even a political campaign.