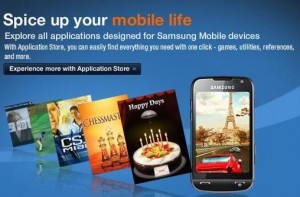 Samsung has followed the likes of trail-blazers, Apple by launching a mobile app store in the UK.

This new service (initially only available to Samsung Omnia i8910 handset owners) will offer around 300 applications from the usual selection of categories including games, social networking apps and productivity tools.

Support for more phones is expected before the end of the year alongside a load more new apps from names such as EA and Capcom.

So far Samsung is claiming Guitar Hero World Tour is the most popular game available at the mo.

Nip along to the Samsung App Store and have a goosey.