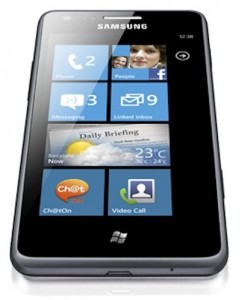 Looking for a new Windows Phone 7.5 handset but like what Samsung is doing at the moment? You’ll be pleased to read that Sammy have released their Omnia M Mango mobile.

The Samsung Omnia M runs on Windows Phone 7.5 Mango and is kitted out with a 4-inch Super AMOLED display and 1GHz processor.

The Omnia M may not look as ‘now’ as Nokia’s Lumia 900 but it can boast a svelte 10.5mm waistline and palm-friendly contoured back.

The Sammy Mango smartphone does have plenty of social skills though.

The Omnia M is being hailed as a social multi-tasker thanks to some neat interactive apps.

Kicking off with Samsung’s ChatON service whic enables users from any phone platform (Windows, Android, iOS or BlackBerry) to communicate with each other either individually or as a group.

Available to be downloaded is the Family Story app which uses a cloud-based network to share messages, videos and photos on multiple Samsung devices.

Samsung AllShare is baked in and allows you to play any films, music and games you have downloaded on the Omnia M direct to a compatible TV. On the music-side, Music Hub’s Smart DJ feature creates playlists from your music collection depending on your mood.

Messages and contacts from Facebook, Twitter, LinkedIn and Windows Live will automatically be synched into one outlet via Windows Phone’s People Hub.

You also get 25GB of free online storage with Windows Live SkyDrive.