Samsung Grabs Metrix, Velvet and Legend Names – Might one be for the Galaxy S III? 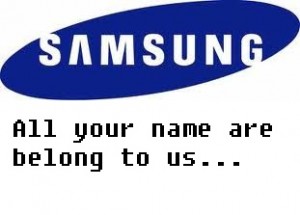 If I said to you: Velvet, Legend and Metrix – what would you think? Could these be the names of a bunch of new superheroes? Perhaps there’s a new series of Gladiators coming out? Apparently, these are the monikers given to some new Samsung smartphones and/ or tablets.

Are you ready for the Samsung Galaxy Metrix, Galaxy Velvet and Galaxy Legend?

Yes, I know that HTC has already released the Legend (not as legendary as the One X though), and Galaxy Velvet sounds like a new confection from Mars and I’m sure that the original Atari console had a game called something similar to Metrix.

Samsung has filed for trademark protection for these three names in the US which doesn’t necessarily mean that they plan to release devices with these names – but, I can see HTC having something to say about them trying to grab ‘Legend’.

Samsung has already been busy this year as it has so far bagged Galaxy Grand, Galaxy Premier and Galaxy Next – all of which sound very Hollywood to me.

Others include the Galaxy Accelerate, Galaxy Thunder and Galaxy Express – back to those early arcade games then. How about Galaxy Gauntlet, Galaxy Out Run and Galaxy Asteroid?

News is hotting up that the first week of May will see the unveiling of the Galaxy S III. Rumours point to Sammy perhaps doing an Apple and may not follow the S II with the same naming convention.

Could one of these names be tagged on to the S II sequel?