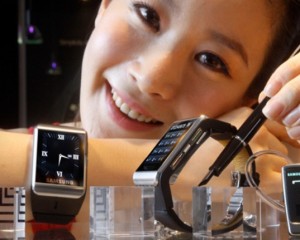 The much rumoured Gear smartwatch from Samsung has been given a launch date according to Bloomberg.

Samsung’s smartwatch is described as being a “wristwatch-like smartphone” and, according to Bloomberg’s source, will make its first appearance at its launch on September 4th.

The news source specifically points to the Android-powered device being able to “make phone calls, surf the web, and handle emails.”

This has been previously indicated by a trademark filing and the device to be named the Samsung Galaxy Gear.

The report implies that the device will operate independently of your smartphone, but it’s entirely possible that the site’s anonymous sources are in fact pointing to a companion device that will connect to your smartphone to place calls and access data services.

The Samsung Galaxy Gear is expected to launch on September 4th at the company’s press event at IFA in Berlin.