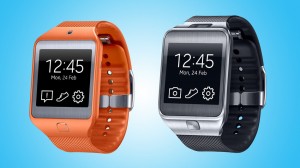 Say hello to the Gear 2 (right in the pic) and Gear 2 Neo who have arrived to expand Samsung’s wearable line to a pair of smartwatches.

The Gears, notice they’ve dropped the “Galaxy” connection, refresh Samsung’s smartwatch range. The main difference between the two new models is that the Neo lacks a camera.

You have probably already noticed that the camera on the Gear 2 is now built into the main watch body rather than the strap, as it was on the first iteration. That’s a big plus for owners who may want to swap the provided strap with one of their own.

There are other upgrades, of course. Each of the two new smartwatches includes a heart-rate sensor as well exercise modes, making them perfect as fitness companions — not just tiny windows to your smartphone.

The watches now have their own music players too, which are able to output wirelessly to Bluetooth headsets.

I dig the neat addition of infrared emitters so that you can use them as a basic remote control for your TV, just like Samsung’s recent tablets and phones. 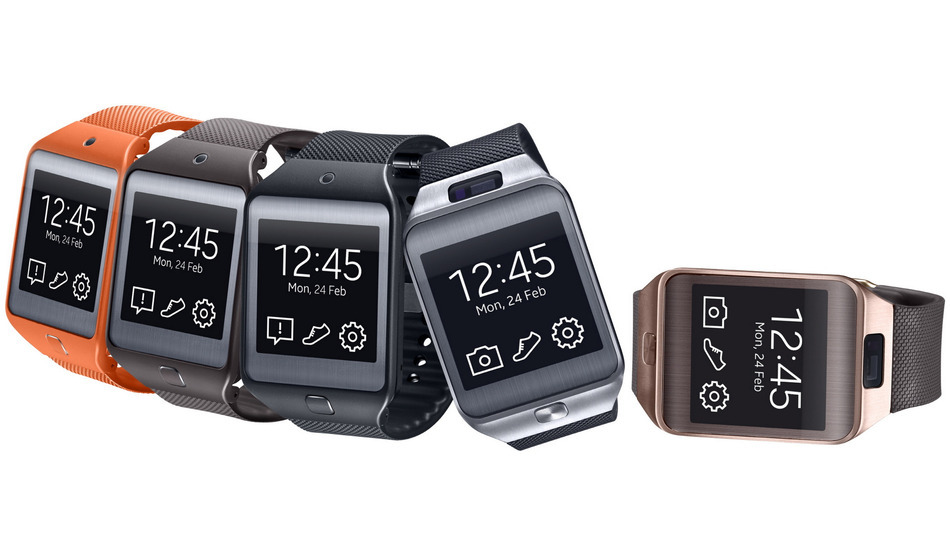 As was mentioned previously, this generation of Samsung smartwatches is powered by Tizen, which Samsung is now saying is its official operating system of choice for its wearables (the previous Gear was Android-based).

I’ve had no word as to what this switch to Tizen will mean regarding the compatibility of Gear apps, but the good news is that you’ll be able to use these models with more devices: Samsung says the Gear 2 and Gear 2 Neo will be compatible with dozens of the company’s phones.

Like the original Galaxy Gear, the Gear 2 and Gear 2 Neo each sport a 320 x 320 1.63-inch touchscreen. The new models, however, pack a dual-core 1GHz processor (the original was single-core 800MHz chip) so should be a bit swifter. They still keep the 512MB of RAM and 4GB of storage from the original.

Without the 2-megapixel camera, the Gear 2 Neo is slightly lighter than the Gear 2, 1.9 ounces vs. 2.4 ounces.

Both watches are available in Charcoal Black and Wild Orange, while the Gear 2 also comes in Gold Brown and the Gear 2 Neo can come in classy Mocha Gray.

Better Gear than before?

The Gear 2 is lighter, thinner, more powerful, offers a better screen, much, much better battery life, and a sharper watch-like profile.

It now has the camera on the watch itself, rather than the wristband, which makes a lot more sense and offers the chance for more personalisation.

So, very much Better – it’s just a shame that Samsung couldn’t wait to release these versions instead of the rush job they did to get the Galaxy Gear on the shelves.

The Neo will be priced at around $199 with the full-featured Gear 2 hitting around $250.

I would expect a Galaxy S5 + Gear 2 bundle or two being offered which should present a saving.