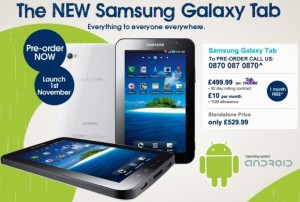 Well, Carphone Warehouse has revealed their price for Sammy’s slate – they attach an asking price of Â£530 for a SIM free Tab or Â£500 with a TalkMobile contract.

That’s a lot easier to cope with if you remember Amazon’s punt that commenced bidding at Â£800, which the dropped to Â£680 and then rested around the Â£600 mark.

Â£530 is the same price as the lowest-spec 3G version of the Apple iPad. The SIMilarities (sorry) continue with both sporting 16GB hard drives.

The iPad will boast about its 9.7 inch screen compared to the Tab’s 7 inches. But remember the Tab packs a camera and is happy to support Flash.

As you’re going to need to factor in 3G connection for your Tab Carphone Warehouse’s own TalkMobile deal isn’t too shabby as it’s a 30-day rolling contract (so no 18 month shackles here) which costs you a tenner each month for a 1GB data allowance.

You’ve still got a month before the Tab hits the shelves so there may well be better deals to be had.