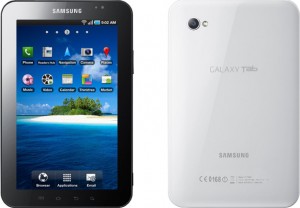 Amazon UK is obviously out to give you lovers of Gadgety niceness a heart-attack, or at least a good laugh.

I had a good ol’ play with Samsung’s Galaxy Tab last night at an event thrown by the Three Network and, although it’s a nice enough device if I’d have noticed the price that Amazon put up I would have have fallen off my chair.

Fortunately Amazon also noticed the error of the ways and cut the price.

OK, so Â£680 is a saving of Â£120 off the RRP and matches the asking price put up by eXpansys but this is for the 16GB version – I dread to think how much the 32GB model will cost!

As I said earlier, the Tab looks good, has a decent 7-inch screen, runs Android 2.2, you can make calls from it using a Bluetooth headset, has an expandable memory, it runs Flash and even the camera has a flash but asking for so much more coin than the Apple iPad? Most people are using the iPad as a benchmark so pricing yours more than that means that your product HAS to be offering a lot more.

Being able to shove a Tab in your suit/blazer pocket just isn’t convincing enough Samsung!

Â£500 to Â£550 would be a more reasonable asking price but, even then, I’m not overly convinced.

I tried finding out how much Three would be asking for the Tab on a contract but no matter how much I pestered, even holding the Tab hostage at one point, no price was forthcoming. I’m guessing this might be a decent way of being able to afford one.

ViewSonic plans to drop their 7-inch Android 2.2 running tablet for Â£350 in the next few weeks so…….