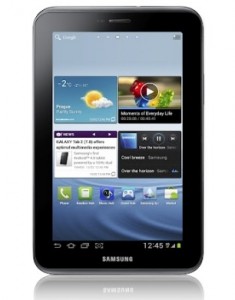 Earlier today I introduced you to the new Samsung Galaxy Tab 2. Not only will this 7-incher be the first Samsung tablet to come with pre-loaded Ice Cream Sandwich operating system it will land in UK in a matter of weeks, before anywhere else!

You will be able to get this tablet in three different storage capacities, that is 8GB, 16GB and 32 GB – not just the two flavours I mentioned before. Sorry 😮

It’s certainly a more attractive package – it’s not only two inches smaller than its predecessor, the Tab 8.9 but you get that lovely Android 4 with all of its attendant new features.

Simon Stanford, managing director, UK & Ireland Telecommunications & Networks Division, said, “We have actively worked to enhance and extend our tablet offering since the launch of the original Galaxy Tab 18 months ago, to put us in the position we are in today of being able to offer our customers a portfolio of devices of varying sizes relative to their different needs. We are delighted to be offering our customers even more choice with our latest tablet which is our first to feature Android 4.0.”

The tablet is likely to hit UK market in March this year. However, Samsung chose not to disclose the price point for the tablet.

Let’s see if this gets an easier life than some of Samsung’s other products. Recently Apple launched a fresh wave of suits against Samsung alleging the latter’s Galaxy Nexus phones are in violation of various Apple patents such as the “slide-to-unlock” function. Mind you, Apple has been sent a strong letter by the British broadcasters ITV about the rumoured name of their HD telly – iTV, so that might keep them busy 😉