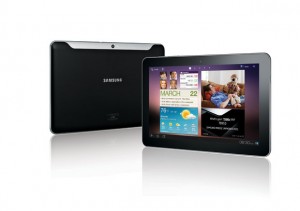 Samsung checked out the Apple iPad 2 which releases tonight at 5pm in the UK and were a little shaken.

“will have to improve the parts that are inadequate” as “Apple made [the iPad 2] very thin.”

As any self-respecting competitive tech company would do; they went and put the Samsung Galaxy Tab 10.1 together…

Now – this is not the same Galaxy Tab 10.1 which has been previously flashed around. This is thinner but with a slightly less impressive camera. To confuse matters further, Samsung are releasing both and keeping the same name – yup, both are called The Galaxy Tab 10.1. Jeeze! Like buying tech isn’t confusing enough already!

Both Galaxy Tabs are rocking the same 10.1-inch 1,280×800-pixel display and the latest will be running Android 3.0 Honeycomb via Sammy’s TouchWiz user interface.

Where Tab 10.1 version 1 is equipped with a 8-megapixel camera Tab 10.1 Jnr has been handed a lowly 3-megapixel snapper – so if you go for the thinner/lighter option you’ll be recording 720p video, rather than the 1080p video of 10.1 senior.

Galaxy Tab senior also comes in 16GB or 32GB flavours but junior will also be available as a 64GB version – processors appear to be the same 1GHz dual-core processor across the board.

It does seem, however, that we in the UK will not be faced with this twin tab dilemma as the Vodafone-exclusive Samsung Galaxy Tab 10.1 will be 10.1 senior – The chunkster with the better camera or, as Mr. Dong-Joo called it – the “inadequate” one.

So, if you want a Samsung Galaxy Tab with a 10.1-inch screen head over to Vodafone in the next month or so. The actual release date and pricing are still a secret and at least we haven’t got the confusion of which 10.1 to buy 😉