Samsung Galaxy Tab Drops Below Â£600 and Another Month Added 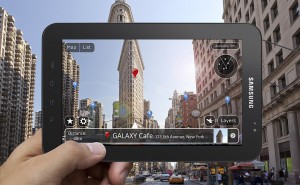 Remember my shock at seeing the price Samsungâ€™s Galaxy Tab was going for after having a fondle in Soho with the Sammy Slate?

If you recall Amazon.co.uk originally had it up for Â£799 and then it slid down to Â£680 which was still a tad silly.

Now the online book and grocery supermarket, Amazon UK has dropped the price yet further to Â£599 – a full Â£200 lower than its claimed Â£799 RRP!

Perhaps they listened to me and decided that the price needed to be considerably lower in order to be more competitive with Apple’s iPad?

You have to admit though, Â£599 is a more reasonable asking price for Sammy’s FroYo equipped 7 incher that has, amongst other things a 3.2-megapixel camera round back and a 1.3-megapixel video calling cam round front.

The price isn’t the only thing that’s slipped though – the date of availability has been bounced back from next month to November 1st.

Click here to get your Samsung Galaxy Tab for Â£599

Whilst you await November to come around why not have a gawp at this vid below and try to figure out why a lad with a backpack would riskily shove Â£600 or Â£800 worth of tablet into his ill-fitting jeans or scratch your head at how â€œGo deepâ€ means the Tab can use a MicroSD card of up to 32GB.