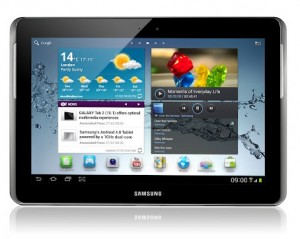 A week-or-so I reported that the Samsung Galaxy tab 2 was being held up due to issues with Android 4.0 – well, there seems to be another hold up for the 10.1 slate. There is, however, a quad-core silver lining.

News has reached me that Samsung has halted production of their Galaxy Tab 2 10.1 tablet, or the GT-P 5100 to those in the know, in order for it to be upgraded to a quad-core CPU.

The timing may indicate that the new Sammy tablet could be endowed with their latest Exynos 4412 chip. That would would push things along at a slick 1.5GHz. Word is that the processor runs 25% faster than the current CPUs whilst maintaining a healthy battery life.

The 4412 is also the chip rumoured to be dropped in to the Samsung Galaxy S3.

As there’s no mention of the Galaxy Tab 2 7.7 I am taken to presuming that the smaller slate will stick with its dual-core brain.

Reports that the 10.1 Tab 2 was fairly nippy already with its 1GHz engine leads me to believe that Samsung has had a look around and decided that it needs something a little more special.

Would the quad-core powerhouse be enough to nibble in to the new iPad’s market share?

Well power is only part of the challenge. The new iPad still packs more pixels – The 10-inch Tab 2 is equipped with a 1280×800-pixel screen which, although very respectable, is trounced by the iPad’s 2048×1536-pixel retina display.

On top of that there’s the user experience. What else has Sammy got planned for the Galaxy Tab 2 I wonder…

“The Galaxy Tab 2 10.1 will come to market worldwide as planned with a dual-core processor. Rumors about production delays or changes to the product are false.”

There you have it folks – from the people who should know 🙂