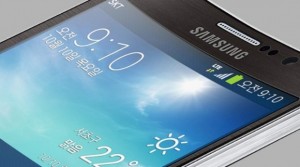 That model number has been associated with the Samsung Galaxy S5 before – namely the model expected to be available via US network Verizon. However, it is the first time we’ve seen concrete evidence a device with that model number exists.

The image was published to Flipboard by user @123fliptest. Word on the interweblogosphere suggests that the user may in fact be Samsung and that the name may hint at deeper Flipboard integration in the Galaxy S5. Who knows?

The photo’s EXIF data revealed that the photo comes with a resolution of 5312×2988 pixels. Depending the sensor Samsung uses in the smartphone, that could result in the Samsung Galaxy S5 coming with a 21 megapixel camera.

In order for the phone to come with a 21 megapixel sensor, it would need to retain the 4:3 sensor used in Samsung’s existing smartphones.

However, it has also been suggested that the Samsung Galaxy S5 could come with a 16:9 sensor. If that’s true, it would mean that this all fits with the phone being equipped with a 16 megapixel OIS lens.

I am sure that all will become clear as most people are expecting Samsung to unveil the Samsung Galaxy S5 at Mobile World Congress next month.