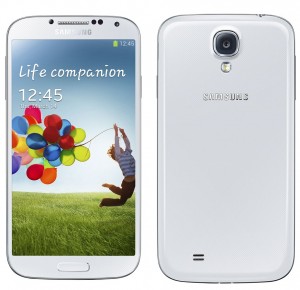 Samsung has finally unpacked the Galaxy S4 at an event in New York’s Radio City Music Hall. Following in the footsteps of the bestselling Android phone on the market, the Galaxy S III, the S4 looks to add a load of features whilst keeping all its predecessor’s good bits.

As well as Samsung announcing its latest and greatest, the other thing people are asking is “how does it stack up against the iPhone 5?”.

So, I’ll go through the main points of the Galaxy S4’s features and then try to weigh it against the Apple smartphone.

What’s the Galaxy S4 got?

Most will be happy that the Galaxy S4 has kept a similar look to the S III. In fact, it almost looks identical.

The S4 is actually slightly thinner than the previous Galaxy S and has a larger, 5-inch screen.

The handset is made entirely of polycarbonate, and will be available in two options: black mist and white frost.

The new Sammy flagship has an updated 1080p Super AMOLED screen and, depending where you are, will be loaded with a 1.9Ghz quad-core processor or a 1.6 octa-core processor, as well as 2GB of RAM.

An IR-blaster built into the phone allows it to replace your television’s remote control. Samsung’s WatchOn software works as a virtual TV Guide of sorts to enhance that experience.

A 2,600mAh battery powers the handset, and while Samsung didn’t specify at the event what that 2,600mAh would get you, it did say that it was constantly working on software tweaks to ensure you get the most out of that battery.

Samsung have given the camera in the Galaxy S4 a good going over. The phone has a 13-megapixel rear-facing camera, and a 2-megapixel forward-facing one.

The new smartphone has nabbed some of the features from the Galaxy Camera, such as a number of the scene modes as well as the on-screen mode dial. This adds up to the S4 packing 12 different shooting modes.

Samsung’s DualShot is a rather natty feature. This allows the user to take a photo with both the front and rear camera at the same time and then combine the two together into a single photograph.

I particularly dig the Cinema Photo feature which lets you pick one piece of your photo to move, while keeping the others still.

The Galaxy S4 comes running Android 4.2.2, currently the most recent version of Android. Along with Android’s stock features, Samsung has added a number of other Galaxy-specific software features to the phone that make it stand out from the pack.

Samsung’s Smart Scroll feature allows you to scroll through websites by tilting your phone – unfortunately not by tracking where your eyes are.

Smart Pause is, however, controlled by your peepers. This feature stops and starts video based on whether or not you’re looking at the screen.

If you’re watching a movie and put your phone down to grab a snack, video play will stop until you return and look at the screen again.

Group Play lets you share music, photos and games with the people around you. The feature can also be used to play music together as a group, turning your friend’s phones into a makeshift surround system of sorts. For instance, your phone might play the role of the right speaker, while your friend’s phone will take care of left-side sounds. If a third friend joins in then theirs can be used as the centre speaker, etc.

Air View features lets you hover your fingers over an email, S Planner, or image gallery to view a larger preview of content before selecting it.

Air Gesture allows you to change a song, scroll through a web page, or answer a call by just waving your hand.

S Health works not only as a pedometer, but also a way to keep track of what you eat and your sleeping patterns.

An optional ‘S Band‘ syncs via Bluetooth with your phone and can be used when it might not be practical to tote your S4 along with you – sometimes that lycra outfit wont have pockets.

Finally, S Translate helps you translate your email or text messages into one of nine different languages, using text or voice translation. The feature can translate from both speech-to-text and text-to-speech.

The Samsung Galaxy S4 will roll out to an impressive 327 operators across 155 countries and the Galaxy S4 release date is April 26.

How does the S4 compare to the iPhone 5?

After going through all the specifications and features of both these smartphone big hitters it looks like the Samsung has a lot more to offer.

Samsung is even classing it as a “Life Companion” rather than just a smartphone.

Now, it has yet to be seen how many of the Sammy’s features and new tricks are actually useful (how many iPhone users are putting Passbook to good use?) or are merely gimmicks.