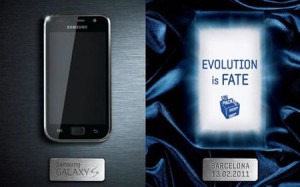 A quick follow up on the successor to the Samsung Galaxy S.

The Galaxy S2 is expected to pack a dual-core CPU and an 8 megapixel camera with 1080p FullHD video recording which we all kinda guessed.

The S2 will be loaded with Android 2.3 Gingerbread as its OS of choice and will be based on Samsung’s custom dual-core Orion SoC (System on Chip).

The platform is said to use a pair of ARM Cortex A9 cores both running at 1GHz much like the NVIDIA Tegra 2 chip.

Graphics are supposed to be five times better than on the Hummingbird SoC so it might as well be the PowerVR SGX543.

Other features of the next-gen Galaxy include a 4.3″ WVGA screen with Super AMOLED plus technology, NFC integration and all of this is packed into a mere 9mm of thickness.