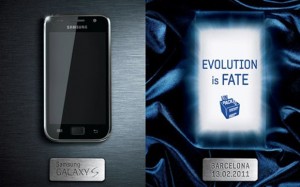 Mobile World Congress 2011 is almost with us, and Samsung has outed the ad that you can see here.

Following the number of dual-core handsets showcased at CES 2011 could the evolution be that Samsung is unveiling a dual-core mobile device of its own?

Or is this evolution be a nod to LTE – which stands for Long Term Evolution.

Samsung will be looking to follow-up on its 10 million plus unit selling Galaxy S – dual-core seems to be the most like path to take at the moment.

Speaking at CES earlier this month, President of Samsung Mobile, J K Shin, reported announced: â€œWe will continue to keep our technology leadership this year. In terms of dual-core applications, we already have a program, and next month at Mobile World Congress we will unveil it.â€

Other specs for the S2 bouncing around the interwebs are that it will be furnished with a 4.3 inch Super AMOLED 2 touchscreen with 1280Ã—720 resolution.Â  4GB of ROM and 32GB of built-in flash memory.Â  The camera will be an 8MP job which will be expected to support HD video recording.

Thereâ€™ll be another teaser outed on 1 Feb, before the press conference at Mobile World Congress on 13 Feb – can’t wait for the next hint but in the meantime; what’s your thoughts?