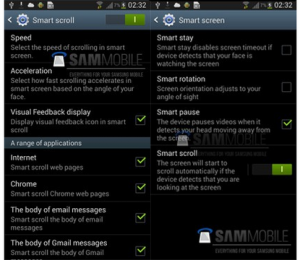 A couple of days ago, The New York Times suggested that the upcoming Samsung Galaxy S IV would offer smart auto-scrolling by tracking your eyes. These screenshots seem to support this.

The Samsung Galaxy S IV has said to be coming equipped with clever eye tracking tech and these screenshots, published by Sammobile from an unnamed sources, seem to show that this is indeed so.

Naturally, the spy photos need to be taken with a fist-full of salt. But, if the images are on the up-and-up, then they suggest that the phone will offer a highly customisable auto-scroll feature.

It looks like that you are able to select which apps you want this feature to be activated on and adjust how fast the scrolling happens. The neat thing is that it also includes a smart-pause feature, which stops video if you look away.

Hmmm… could be annoying if you’re one of those that turns away from gory parts in movies. You look away and then back to see the phone has helpfully paused the nastiness for your returning glance 😮

Sammobile also says that the images back up claims of a 1080p display. Well, not long to wait before we find out now as the Unpacked event happens next week, March 14th.