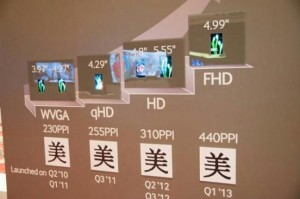 Samsung is rumored to be announcing their new Galaxy S IV smartphone at MWC 2013 next month with a peeper-pleasing screen.

Word is that Samsung is set to unveil their latest flagship phone to replace the ever popular Galaxy S III at next month’s Mobile World Congress. It is then expected for Sammy to launch the Galaxy S IV in May.

Apparently, the new Galaxy will be pakcing a new Super AMOLED display.

This follows Sammy showeing off some new displays at this years CES, one of which is scheduled to launch in quarter one of 2013. This snazzy screen is a new 4.99-inch full HD Super AMOLED display with a resolution of 1920 x 1080 pixels and 440 pixels per inch.

The timing could be coincidental but it is reasonable to presume that Samsung could possibly use this new 4.99-inch Super AMOLED display in their Galaxy S IV smartphone.

Other rumored specifications include a quad core 2GHz Samsung Exynos 5450 processor and a Mail-T658 GPU, plus 2GB of RAM and a 13 megapixel camera on the back plus a front facing 2 megapixel camera.

Not long to find out for sure. What would be on your wishlist for the next Samsung Galaxy S class?