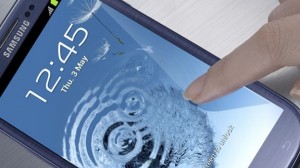 Are you loving your Samsung Galaxy S III? Are you laughing at the hoards fighting over the new iPhone 5 (especially as there may be UK 4G issues)? Looks like you should start saving your money as the S III will soon be moving over for the new Sammy flagship Android phone – the Galaxy S IV!

Samsung launched its latest Android smartphone, the Samsung Galaxy S III, back in May of this year but, according to whispers coming from the direction of Samsung’s South Korean home, the Galaxy S III’s reign may be extremely short-lived.

With Apple upping the ante and launching the iPhone 5 just in time to become a Christmas list favourite, Samsung needs to act fast.

Apparently word has come from a Samsung company official and other inside sources which have tipped the Galaxy IV for an unveiling at MWC 2013, which opens in February with a global release penciled in for March 2013.

Obviously, very little is known about the phone at this stage, but the consensus is that Samsung’s solution to the iPhone 5 problem will be to outsize Apple’s handset by an even larger margin – could we see the Samsung Galaxy S IV sporting a 5-inch screen?