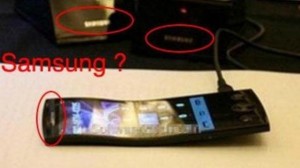 Of all the Samsung Galaxy S III rumours I did not see this one coming. Could the S3 flagship phone sport this intriguing ‘S’ shape?

Samsung has confirmed that the release of their Galaxy S III smartphone would happen after MWC 2012 in order to grab the most attention.

If this is the shape of the replacement for the Galaxy S II then I reckon Samsung will be getting plenty of coverage!

The S-shaped mobile is quite unusual and nothing like the purported S III seen in a recent video.

The Samsung spy shot, courtesy of a Chinese blurry cam, comes with reports of the device packing a heavily contoured 4.6-inch 3D display and body.

The squiggly design would fit in to Samsung’s future plans after showing off its flexible display technology. So, if this isn’t the Galaxy S III it could well be the prototype for Sammy’s 2013 range.

As for the expected Galaxy S III – the spec list includes a 4.65-inch HD Super AMOLED display with a stunning 1280 x 720p resolution, 2GB of RAM, 32GB of internal storage and a 12-megapixel rear-mounted camera with the now customary 1080p Full HD video recording capabilities. A 2GHz dual-core processor has also been tipped for inclusion.

Would the thought of an S-shaped smartphone make you want it even more?