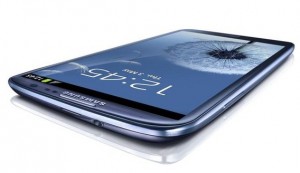 Following months and months of speculation, leaks and downright bonkers rumours the wait is very nearly over for the Samsung Galaxy S3. The new flagship from the Korean manufacturer hits the shelves towards the end of this month after an impressive debut in London on 3 May, and demand is already high for the heavily hyped device. But what can we expect from the S3? And more to the point, what does it have to offer that other smartphone contenders don’t?

Well for starters, it’s a bit of an eye catcher. Samsung have gone big on what it terms its “Nature” UI, and the S III proves to be a sleek number laden with natural curves and subtle nuances. Based around a pebble design dreamt up by the Sammy visionaries, its 8.6mm frame features some well tapered lines and this makes for a comfortable in-hand experience, whilst at 133g it’s lighter than most smartphones too.

This simple and functional body is dominated by an impressive 4.8-inch HD Super AMOLED display that deals strictly in stunning images. With a 720×1280 pixel resolution, the visuals on the S III are enough to impressive the most hardened tech fan, and this proves to be one of the key elements, even amidst the impressive list of features. Android Ice Cream Sandwich out the box and a hefty 1.4 GHz processor to cope with it, are but two, each making for a lightening fast mobile experience.

Add to this a host of gadgetry such as S-Voice – a Siri rival capable of executing your voice commands that Samsung are VERY excited about – Pop-up Play that allows the watching of video content whilst doing other stuff, and the nifty Smart Stay that tracks your eye movements and dims/locks the screen should your gaze rift elsewhere, and you have a smartphone that shapes up to be every bit as remarkable as the generous hype suggested.