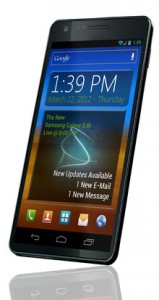 A ‘leaked’ picture of the Samsung Galaxy S III not only shows what the latest Sammy smartphone looks like – it also tells us when it will be announced.

The picture currently doing the rounds on the interwebologosphere shows a slender new Samsung smarty, but on that swish screen also is found an interesting tidbit.

Samsung did say that the Galaxy S III would have it’s own party after Mobile World Congress. Also the claimed March 22nd arrival of the third generation Galaxy S would tie in nicely with recent Samsung Galaxy S3 rumours which predict an April release for the Android handset.

It’s even already appeared on Samsung’s own website, for pre-order as well as on video!

For your peeper’s pleasure the latest word is that the S II successor will be packing a 4.8-inch display with Full HD 1080p resolution and a film friendly 16:9 aspect ratio.

What would you expect to see in a week’s time from Samsung? Let me know below 🙂