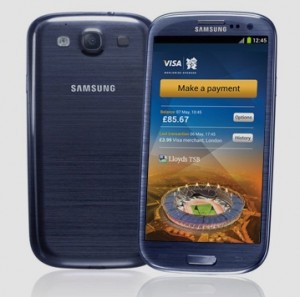 The S III is all set to be available to consumers in the next few weeks, May 30th or there abouts, is nice timing for the equally anticipated 2012 Olympics (unless you’ve been evicted so that your landlord can quadruple the rent).

The 4.8-inch smartphone is packing NFC tech which allows it to be utilised for contactless payments and will flex its muscle throughout the games.

A selection of trialists and sponsored athletes will be using the Near Field Communication smarts in the Samsung Galaxy S III to pay for items using Visa payWave.

The two Olympic sponsors have teamed together to see the Samsung Galaxy S III paired with the Visa payWave app to enable users to make contactless payments on a wide variety of food and drink, merchandise and other purchases throughout the Olympic venues and across the UK.

Swipe the S3 over a wireless reader and it will pay for anything from a coffee to a cab. If the bill comes in over £20 then the transaction will require a password too, for security.

If it’s a success the trial should start to roll out to all S III owners for use on any of the 140,000 contactless payment points in the UK and more overseas.

DJ Lee, Executive Vice President and Head of Sales and Marketing team of Samsung’s Mobile Communications Business, announced: “Mobile payment services enabled by NFC technology are gaining momentum around the world. The Samsung GALAXY S III has been created with our human needs and capabilities in mind and is the ideal device to showcase the ease and convenience of Visa’s mobile payment application at the London 2012 Olympic Games,”

Mike Regnier, Director of Personal Current Accounts at Lloyds TSB, sees this as being the future: “Mobile payments are set to transform the payment process around the world, and will revolutionise the way people pay in the run up to, during, and beyond the London 2012 Games,”

Are you ready to embrace swipe-to-pay yet? Do you already use it?