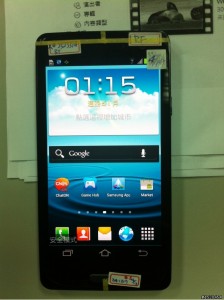 Yet another leaked photopic of the Samsung Galaxy S III – is this what Sammy’s next-gen smartphone will look like?

Are the photograph’s here a true reflection of what will be revealed next week?

To be honest, I’d say that this is not the final look of the S II’s greatly anticipated successor – but it does show one thing for sure nonetheless.

There has already been word that Samsung is handing out disguised handsets with S III innards and this will, more than likely, be one of those. Still, check out that physical home button.

I am taking this as confirmation that Samsung’s design team have opted to keep the home button as well as the usual array of Android touch-sensitive buttons beneath the screen.

Slashgear spotted the pics and these have since been removed from the forum where they first appeared.

What seems to be apparent is that, thanks to Amazon.de leaking the spec sheet, that the Galaxy S III will be equipped with a 12-megapixel camera with a hands-on video suggesting that the display is a 4.6-inch, 720p screen.

A short-lived rumour that the Galaxy S3 would not even be called such. There has since been an official Samsung app which put paid to that particular story.

The S3 is unveiled next Thursday here in London so I’ll be updating you on the latest through Twitter, Facebook and on here 🙂

Check out the teaser video from Samsung which could be seen as taking a swipe at iPhone owners: