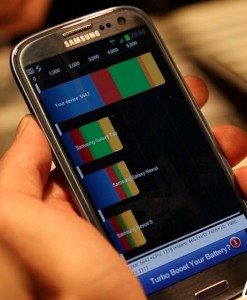 The Galaxy S III is certainly shaping up to be a best seller but has it got enough grunt to nudge my current favourite iPhone alternative, the HTC One X, of its perch? Check out the stats below.

The folks over at Crave have put both the new Sammy smartphone and the HTC One X through a series of tests to see which one has the chops to be crowned King of the Droids.

In the memory testing Antutu benchmark, which also tasks CPU speed and graphics, the S III was awarded with a score of 12,112 points which floored the the One X which mustered 10,827 in the same test.

To ensure that this wasn’t just beginners luck a similar benchmark, Quadrant, was run with the Galaxy S III getting 5,289 points beating the One X, which managed a score of 4,904. Slightly closer but still the new Sammy flagship basks in its victors glory.

The HTC One X had an impressive showing in the GL Benchmark’s Standard Egypt test with a rate of 52 frames per second. The afterglow was short lived, however, as the Galaxy S III topped it with 59fps.

The new Galaxy smarty actually scored the same as the new iPad!

Obvioulsy buoyed by its winning streak the S III went to take on Apple’s latest tablet in the SunSpider JavaScript browser benchmark (in which lower scores are better).

The Samsung Galaxy S III certainly has shown impressive performance in what would seem an equal fight.

Both the HTC One X and the new Sammy are equipped with quad-core chips. The HTC processor runs at a slightly higher clock speed but fails to meet the grunt churned out by the Galaxy S III in these tests.

It has been suggested that it could be due to the fact that the S III has Samsung’s in-house Exynos 4 Quad chip under the hood with the HTC leader being loaded with Nvidia’s Tegra 3.

I’ve not had a chance to have a full hands-on with the S III yet but I all I can say is that both phones are remarkable but the Galaxy S III sure looks to be starting from where the S II left.

Which one would you buy? Have you already got the One X or are you waiting for the S III to appear next week?