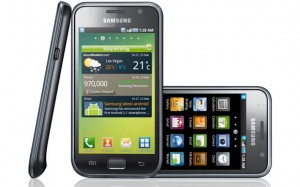 The Samsung Galaxy S was flashed to the gadgety lovelies of Electric Pig at CTIA and they seem to have enjoyed their time with the Android 2.1 Sammy.

Everyone that’s laid eyes on Samsungâ€™s Super AMOLED screen have only had good things to say about it and the Galaxy S’s 4 inch WVGA screen manages to improve on this as it sports some “kit that aids outdoor visibility”.

The spec includes a five megapixel camera capable of HD video recording, GPS and things purr along using Samsungâ€™s own 1GHz chip. You get the option of 8 or 16GB of storage which can be boosted via the microSD card slot, and your film watching can be in AVI, FLV and MKV formats 🙂

Samsung has confirmed that the Samsung Galaxy S will land in the UK as well as everywhere else on the planet but that’s as far as been told so far.

Slip over to Electric Pig for their gallery and more info.