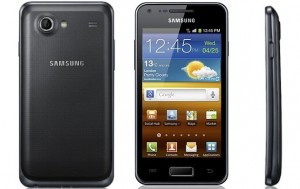 The i9070 device cropped up over the interwebs during the weekend and now that Samsung have gone all official about the new Galaxy handset here’s some details.

The new blower will be added to the same force as the rather spanky Galaxy S III.

“The Galaxy S Advance adds to the successful track record of the Galaxy smartphone range with a phone that combines power and style with all the versatility of Samsung’s Hub services,” according to Samsung’s JK Shin.

The Samsung Galaxy S Advance is equipped with a 4-inch Super AMOLED display (480×800) and has a dual-core 1GHz processor with 768MB of RAM under the hood.

You do get a 5-megapixel camera around the back partnered with a 1.3-megapixel one up front.

The Galaxy S Advance runs on Android 2.3 with the familiar Samsung TouchWiz skin.

The Korean giant seems to be giving us another capable, but thoroughly mid-range smartphone.

No word on pricing yet but I have heard that it will land in Russia in February – and then it will be touring around Europe, Africa, Middle East, Southeast and Southwest Asia, Latin America and China.

If it’s priced right it should do well – what do you think?