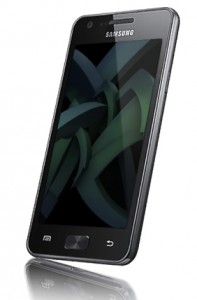 The new Samsung Galaxy R has been announced and it’s all about power. It comes armed with an Nvidia Tegra 2 dual-core chip that will push the 800 x 480px resolution so far that the Galaxy R will even have its own games!

Up until now Galaxies have used Sammy’s 1GHz Hummingbird Cortex-A8 processor but the R comes fitted with Nvidia’s dual core processor just like the LG Optimus 2X, Motorola Atrix, Motorola Droid X2, and Motorola Photon 4G. If you’re unfamiliar with the last two well, that’s because they haven’t decided to visit the UK yet.

You will be able to mess around with the regular, run-of-the-mill Android apps and games, but there’ll also be a selection of ‘console-quality’ games set up to make the most of the powerful Tegra chip – these will be found in the Tegra Zone! The exciting range of games include Fruit Ninja and… Solitaire. Yup – just imagine those cards! 😉

You get a front-facing 2-megapixel camera for video calling and it all runs on Android 2.3 Gingerbread.

In the meantime have a goosey at the video below which shows the Tegra Zone!