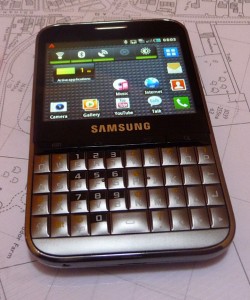 The Samsung Galaxy Pro has the looks to tempt ardent BlackBerry owners away from the RIM machines as well as being keenly priced enough to perhaps attract those BBM obsessed kids (obviously those not in any way connected with the riots) – but is it only skin deep? Has it the smarts as well as the look?

Correct me if I’m wrong but I don’t recall seeing that many QWERTY-equipped Androids. The HTC ChaCha and the Sony Ericsson Xperia Pro’s are the only ones that are springing to mind at this point. This may explain quite a bit really.

You can’t really fault HTC’s Sense user interface and the Son Eric handsets are thin and are smothered in premium touches. The Samsung’s first attack is price – you can walk away with a Samsung Galaxy Pro with All You Can Eat data, 2000 minutes anytime, any network chat and 5000 texts for £27 per month for 2 years.

Thing is – could I live with the Galaxy Pro for 24 months?

When I unpackaged the Galaxy Pro it looked familiar. Like a cousin I’ve not seen in years but can’t place the name. That name is Nokia E71. OK, sat together you’d never think that they were twins but they could be related at the very least.

The Galaxy Pro (GP) is a squat little fella and, where he wont be winning ‘Smooth Operator of the Year’ awards he’s not unattractive. Think, that pleasant guy at work who’s helpful enough but you wouldn’t expect to see him at at the same club as you.

The phone does sit in your palm nicely and the 2.8-inch screen is just about large enough to be useful and, if you’ve just slipped over from a RIM cobbled device it wont be that much of a wrench for you. The BB Curve‘s screen is around 2.5-inches.

You know when girls call boys ‘nice’ just before they state that they love them ‘like a brother’? – that was my feelings regarding the GP.

There’s things I like about the Sammy Galaxy Pro. The micro USB port with its slidy-open door and standard 3.5mm audio jack are located on the top edge of the phone which is where I’d like to see them. I like the fact that this QWERTY-loaded blower only weighs 103g. The thing is, the materials used on its 199x67x10.7mm shell lets you know that this might look like a premium handset and perhaps feel a little like one but I think it’s a safe bet that it will in no way last like one – mind you, I’m guessing most of you reading this change your phones at least every 24 months – perhaps every 6 months, so longevity will be the least of your concerns 😉

You get physical Android buttons situated below the screen on the Galaxy Pro and they’re responsive enough. Good ol’ Sammy has even included a Search button – bless ’em.

To be honest, and I feel that this is my primary duty, the keyboard on the Pro is at least as good as, if not slightly better than the one the ChaCha is kitted out with.

The four line portrait board is fitted with nice large keys that react nicely and firmly. You even get cursor keys as well as a Shift, Alt and Symbol buttons without things feeling like a commuter tube during periods of limited service!

Typing almost becomes a thing of joy – Samsung’s intelligent auto-punctuation and capitalisation really challenges the BB experience and it takes very little time before lengthy notes are whisked off as briskly as a Londoner found with 8 flat screen TVs still boxed hidden in their bedroom.

An odd addition (but each to their own) is that the GP also as an on-screen keyboard facility. I know! Why would you want to activate such a beast when the physical board is so good? But hey, I’m just reviewing the thing – it wasn’t my idea!

Welcome to the Cheap Seats

For me this is where the budgeting is most evident. Nice board, shame about the face.

With such an old skool resolution you find that websites are grainy and, if you’re to read anything, require a few pokes of the magnifying glass icon – no pinch to zoom here people and forget about any other form of multitouch gesturing – although, after downloading the Multitouch Test app it would definitely work.

Gaming, should you brave enough to attempt it, is limited if you’re looking for some top flight swanky titles. Chances are that these aren’t supported. So, for me, it looks like the Galaxy Pro is aimed at sober business person and not whizzy text-a-lot.

The frustrating thing is that the touchscreen is actually very responsive. In a moment of craziness I tried out the virtual keyboard and it was pretty damned good.

The Samsung Galaxy Pro is loaded with an 800MHz CPU which hasn’t been tweaked in any way, shape or form from what I could tell. Just like the ChaCha, you wont notice the fact that it’s not a powerhouse for the most part – unless you’re waiting for GoogleMaps to open.

What you will notice though is the camera – for all the wrong reasons. The 3MP snapper is slow to wake-up and suffers a fair old bit of lag when shooting. There’s not even a flash to attempt to make amends. HTC’s Facebook friendly phone hands you a 5MP number.

Battery life is decent. The 1350mAh cell kept going for a couple of days but then I was no way groping it every five minutes as I do my iPhone.

Call quality was…. well, it worked. It wasn’t as clear as other handsets that I’ve recently tested which was a bit of a shock. This is something that I’ve taken for granted so to hear a bit of noise during conversations made me wonder if it was just the area I was in – so I tested it in the Square Mile and the result was the same. It could just be this test handset but I’d recommend taking a Galaxy Pro for a test run before signing on the dotted.

Sammy may have skimped on the mic and speaker in favour of the swanky keyboard – who knows?

The installed software is pretty basic. True you can download your favourite social apps but these are almost expected to be ready to synch these days and, if Samsung are looking to get a chunk of the BBM market then perhaps they should think about preloading a free IM, Facebook and Twitter just as a matter of course.

The Samsung Galaxy Pro looks like it should be able to taunt the Canadian QWERTY offerings with the joy of Android; and it started well. Samsung have slapped a top quality keyboard on the Pro but it seems that’s where all the money went unfortunately.

It’s a very comfortable phone to use but lacks flare in pretty much every other department.

If it was my money – for a couple of quid more per month I’d take a long hard look at the HTC ChaCha.