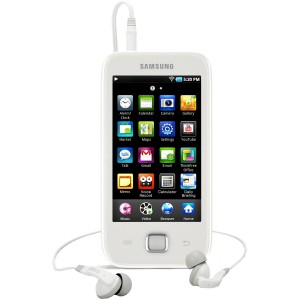 The Samsung-branded music player will get a full unveiling at CES but it’s said to run Android 2.2 Froyo and feature a 1 GHz CPU like the Galaxy S smartphones. While the Samsung Galaxy Player lacks the iPod’s Retina Display it will come rocking a 3.2-inch Super Clear LCD touchscreen running at WVGA resolution (800 x 480 pixel), T-DMB and SoundAlive audio enhancing technology.

The Sammy PMP also has DNLA smarts as well as being able to hook up via WiFi and Bluetooth 3.0.

If you need more media space then there’s the microSD card slot – add into the mix GPS, Android Market, Samsung Apps and a removable 1200 mAh battery then this could well be the Android Personal Media Player you’re looking for.

Hit the links to take you to your choice of Galaxy Player: