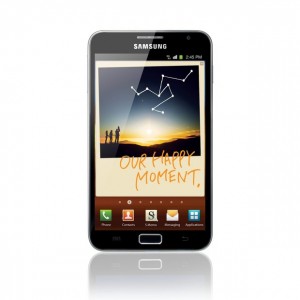 Some of you already are aware that I am still tablet curious. I love new tech but these halfway houses between phone and laptop still have me wondering if they have a place. Phones are getting more powerful and the new breed of ultrabooks are increasing the lappy’s portability. Samsung wants to confuse matters even more so with their Galaxy Note.

Is it a small tablet or a large phone?

Is there a point?

If your pockets are wide enough then the specs look pretty swish.

The Samsung Galaxy Note is packing the world’s first, not to mention largest at 5.3-inches, HD Super AMOLED screen. This chucks out am impressive 1280 x 800 pixel resolution!

Under the hood is a speedy 1.4GHz dual-core processor, HSPA+ connectivity with an  8-megapixel camera bolted on the back to handle all the Note’s imaging duties – that lens will happily capture 1080p HD video at a smooth 30fps.

Large screen, decent snapper and some decent power you’re probably thinking that this mid-sized mongrel would set you off balance but all that kit is squeezed into a body that’s just 9.6mm thin (only a little chunkier than an iPhone 4 but the Note has a screen that’s nearly two inches larger) and weighs in at just 175g. That’s pretty impressive you have to agree.

OK, so it all sounds like a large screened phone albeit with a swanky and large screen. Well, Samsung have bundled in a stylus with the Note called the S Pen – see, it *must* be a tablet now it has a stylus!

The S Pen acts a lot like the one that comes with the HTC Flyer – you’re able to draw on web pages to make notes and then share it with your buddies as well as releasing your artistic potential on the daily commute.

The Galaxy Note then goes and runs on Android 2.3 Gingerbread, the phone OS which is not actually optimised for tablets. Surely a *real* tablet would have opted for Honeycomb?

I’m still not sure if the Note is a big and clever phone or a small/mid-sized tablet.

Have a peek at the official video and let me know what you reckon.