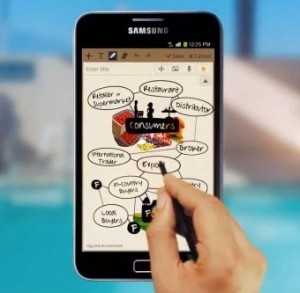 If dropping £600 for a Samsung Galaxy Note is too much then you might be happy to ready that O2 is now featuring the phone on its website.

The super-sized phone/pocket-sized tablet known as the Galaxy Note has just made an appearance on the UK network’s website in the ‘Coming Soon’ section, with November listed as the release date. So, anytime now then 😉

I dutifully clicked the link hoping to bring you a list of tariffs, deals and other nice things but, unfortunately, no such luck folks.

I’m sure something will pop up there soon which will allow you to purchase this halfway-house of a device. Personally I’m treating it as a micro-tablet, mainly because that the Note doesn’t really fulfill one of my prerequisites for a phone – the ability to fit in my jeans pocket. The HTC Sensation XL only just manages this simplest of tasks.

Even Samsung have quietly admitted that it’s big enough to be used as a tablet as they have included a stylus or, rather, an Advanced Smart Pen as Sammy would prefer! This means you can scribble notes and sketches on it – hence the name I guess.

What is a firm win for the Note, however, is the stunning 5.3-inch WXGA (1280 x 800) HD Super AMOLED screen. Yes it’s humongous but it’s also sharp and bright with great contrast.

Even though it does seem to be a jack-of-all-trades that £600 for a SIM-free Galaxy Note does still feel a little painful.

It has already featured on other sites for free or heavily subsidised but it will be interesting what O2 will offer if you go direct to the network dealer.

Would you become a Note taker if the price was right – and what would that price be?