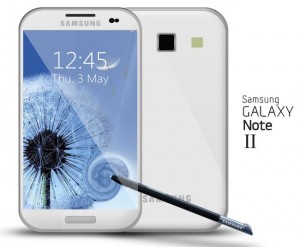 The Note was the first oversized phone to blur the lines between phone and tablet. It even manages to make the HTC Sensation XL and One X look almost normal.

Even stranger is that it really appears to be popular!

The Note 2 is reported to be a 5.5-inch slab of a phone, a slight but potentially noticeable size increase over the current version’s 5.3-inch screen.

Next month sees the annual tech invasion of Berlin known as IFA. That’s where the original Note first made an appearance last year – expectations are that Note 2 will be there this time to say ‘Hi!’ with the rest of this year’s must-haves.

Not only is Sammy’s phablet expected to be larger the new Note will likely to pack a quad-core processor.

With the lift in processor-power you can expect the current 8-megapixel snapper to be bumped up to a 12- or 13MP job.

I would assume that Note 2 will sport Android 4.1 Jelly Bean, the next generation of Android software for phones and tablets.

Jelly Bean will land first with the Google Nexus 7 later this month and this should lead the way for other new Android devices.