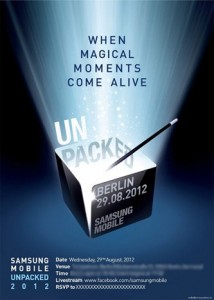 There had been whispers that Samsung’s follow-up to the surprisingly popular Galaxy Note would be revealed this month, and now I have confirmation from the company itself.

Reuters reports an unnamed Samsung spokesperson has revealed that, the next Galaxy Note will be unveiled at its Mobile Unpacked event in Berlin on August 29th, a year after the original.

Samsung isn’t saying anything else about the new Galaxy Note, but earlier rumors have suggested a slightly larger 5.5-inch screen. I would expect it to feature the same Nature UX Android customisation found on the Galaxy S III.

I would also honestly expect the Note II to be running on the Jelly Bean flavoured Android.

If you need even more screen real-estate then Samsung’s 10.1-inch version (shown in gallery) may be more to your liking. Negri Electronics, who is apparently offering pre-orders for Samsung’s upcoming Galaxy Note 10.1, has some impressive specs.