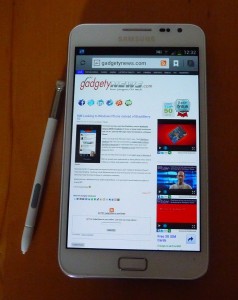 I realise that the Samsung Galaxy Note may be old (in tech terms) and that the Note II has already been rumoured but this has been the first chance I’ve had to live with the phablet.

I don’t mean to use the term ‘phablet’ in a derogatory manner but you can’t help but notice the size of what Samsung is selling as a phone.

The Samsung Galaxy Note is dominated by its 5.3-inch, 1280×800 Super AMOLED display – The Galaxy Note II is said to be even larger. Samsung’s smallest tablet measures 7-inches!

Another thing that the Note does differently to other ‘phones’ is that it brings back the stylus from the old PDA days – although Sammy has named it the S-Pen.

Under the hood is a dual core 1.4GHz processor and, despite its screen-size, the Note is slim and light in the hand lining up at just 9.65mm thick and 178 grams in weight.

THe Note is equipped with an 8-megapixel camera on the back which can record full HD video in 1080 at 30 frames per second, the camera also features an LED flash, up front there is a 2 megapixel camera for video chat.

Other specifications on the Samsung Galaxy Note include Bluetooth 3.0, USB 2.0 and 802.11 a/b/g/n WiFi plus WiFi direct, it comes with 16GB of built in storage plus a microSD card slot which takes up to 32GB microSD cards.

The Galaxy Note’s 5.3-inch display is a Super AMOLED number which pushes out a resolution of 1280×800 pixels and is an impressive screen. The size and clarity makes the Note great for watching videos and movies, also browsing the web, reading emails and playing games is also very good on the display.

The Galaxy Note is loaded a with dual core 1.4GHz processor which pushes everything along pretty smoothly and opening apps and running games on the handset feels fast and responsive.

The first thing I did on receiving the Note was to update it from Android 2.3.5 Gingerbread to Android 4.0.3 Ice Cream Sandwich. Everything moves along rather spritely on Samsung’s TouchWhiz user interface.

The Galaxy note features a rear facing 8-megapixel camera and is a capable snapper. Framing shots is super easy thanks to the 5.3-inch view-finder although, on the flip-side of the coin, you might feel a little daft holding up something almost tablet sized to take a picture of your mates. But, saying that, I’ve seen people do the same with iPads.

The LED flash does a good job of illuminating scenes and nifty features like Panorama makes it fun to use.

The Galaxy Note’s camera can also record full high definition video in 1080p at 30 frames per second which is pretty decent and, for video chatting, there’s the 2MP unit up front.

Now, it’s been a while since I’ve used a stylus and, back then, it wasn’t exactly a joy-filled experience. Thankfully Samsung has sorted things out and Galaxy Note’s S-Pen works very well on the large Sammy’s touchscreen.

The Galaxy Note features a number of built in apps that are designed specifically for the S-Pen, which include S-Memo, and more plus there are a bunch of third party apps available which are designed for the S-Pen. Combining with the 5.3-inch display the S-Pen opens up a host of new possibilities with document editing, note taking and image manipulation handled with ease and pressure sensitive accuracy.

Having such a huge display I though battery life would be measured in hours rather than days. The thing is, thanks to the Note’s larger form, Samsung could sling in a bigger battery.

The Galaxy Note features a Li-ion 2,500 mAh battery ensuring the device can surpass the essential one day power hump and, if you’re careful, you might even get the phone to get well in to day two and almost day three if you’re a low to moderate user.

The call quality is excellent on the Samsung Galaxy Note – I was using it via a Three pay as you go SIM and, for the most part, using it hands free through my AKG bluetooth headphones.

Let’s get this out of the way first – would I use the Galaxy Note as my only phone? Probably not, if I am totally honest. It’s not a failing of Samsung’s or because I don’t like the device. The thing is, I don’t always wear a jacket or take a bag out with me and the Note will not fit in the style of jeans I wear. The 3.5-inches of an iPhone 4S does this easily, the HTC One X and Sensation XL and their 4.7-inch screens – well, just about.

Samsung have done a great job with the Galaxy Note, the phablet will no doubt find love from enterprise users, arty types and, dare I say it, the ladies as they generally have a bag of some description with them.

I reckon that Sammy has managed to produce one of the first modern mobile devices that makes great use of a stylus and if I was given one as a work tool then I am sure I would be more than happy to use it.

or on pay monthly contracts ranging from £20 and £35 per month.

Thanks to Phones4U for the loan of the Galaxy Note for this review.