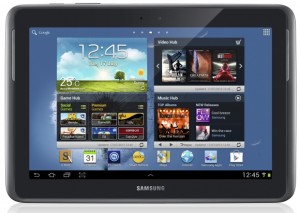 Remember the super-sized Galaxy Note 10.1 I mentioned last week? Well, Samsung has confirmed that it’s due to hit stores this month. The even larger sibling to the popular 5.3-inch Galaxy Note sports the Note’s trademark stylus and a bigger 10.1-inch screen which has a neat trick up its sleeve.

Where most tablets simply utilise their extra screen real-estate by making things bigger, the new Samsung Galaxy Note 10.1 allows you to split that space in half allowing you to do two things at once.

Under the hood of the new Note 10.1 is a 1.4GHz quad-core processor with 2GB of RAM. There’s a 5-megapixel main camera and a 1.9-megapixel front-facing camera. The software is Android 4.0 Ice Cream Sandwich (wot no Jelly Bean?), skinned with Samsung’s TouchWiz interface.

Personally I think that using the extra space on the screen in order to multi-task with a clever new feature called Multiscreen is a smart move.

Multiscreen splits the display so that you see and use two different applications side-by-side. For example, you could have a web page on one side and a note-taking app on the other or, perhaps be watching a video whilst sending an email.

To start with, the apps that support this split-screen feature include the business-like software Polaris Office, note-taking app S Note, and the video player, photo gallery and email apps.

You write notes straight onto the screen with the 6.5mm-thick S Pen stylus just as you did with the original Note.

The emphasis on clever note taking via the S Pen is because Sammy is aiming the Note 10.1 directly at learners. It even includes a Learning Hub app that helps you learn from e-textbooks, as well as planning your timetable and tracking your results.

The Note 10.1 comes in Wi-Fi-only and Wi-Fi-and-3G flavours, and a 4G version is arriving later in the year for countries that have next-generation data.

There will also be the Galaxy Note II phablet which will be a boosted version of the Note which caused so much confusion as to its position ‘twixt phone and tablet.

To make matters even more cloudy – the Note 10.1 can also make calls!

What are your thoughts about the Note range?